Howard Stern will be sticking around Sirius XM Radio — at least for five more years, according to Stern’s new contract. 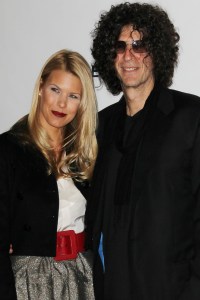 Rumors began running rampant this past week that shock jock Howard Stern might leave Sirius XM Radio and take his famous voice with him. The rumor that Stern was entertaining other offers can be put to bed as it looks like Howard Stern won’t be going anywhere. News broke that Stern signed on the dotted line, landing himself a new five-year deal with Sirius XM Radio.

Howard Stern confirmed the news on his Sirius XM Radio show Thursday morning, but there was one thing he wasn’t willing to confirm — his pay. The mouth of XM was pretty tight-lipped about negotiations, but when Stern joined forces with the station in December 2005, he inked a similar five-year deal for $500 million. Five years later, we can only speculate where his salary could go from there unless he did indeed take the pay cut he was possibly facing.

Sirius XM Radio CEO, Mel Karmazin, praised Howard Stern’s decision to stick with the station to The Hollywood Reporter. “Howard Stern is a great talent and we are thrilled that he will continue to provoke, engage and entertain on Sirius XM. Our agreement is good news on all fronts — it is good for Sirius XM subscribers and good for Sirius XM stockholders.”

There’s no doubt Stern’s fans will be rejoicing as his voice has brought satellite radio to the forefront of entertainment. “Howard forever changed radio and was instrumental in putting Sirius on the map when he first launched on satellite radio,” Karmazin said. “He is one of the few ‘one-name’ entertainers in the country and our 20 million subscribers are lucky to have him.”

While Karmazin believes the deal reached is fair to all parties, we’re still wondering — just what does it take to keep Howard Stern happy?