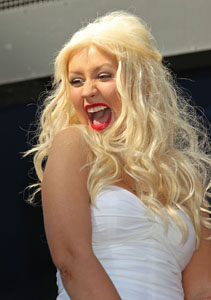 After looking at the photos, we can forget about Christina slutting it up in the pasties. But, can we please discuss this woman’s closet? The woman has a library of shoes. I die.

Anyway, Christina’s rep says the cell phone shots were leaked by someone who hacked into her stylist’s phone, and despite the fact that we’ve seen the singer in as little clothing or less, she’s pretty ticked about it.

“The photos of Christina Aguilera being leaked to the press were illegally obtained by a hacker who tapped into Christina’s personal stylist’s account,” Aguilera’s rep told Us Magazine. “The photos were taken in the privacy of Ms. Aguilera’s home and were used only in a personal exchange between the star and her stylist.”

“We find the actions of the hackers and the press who purchased and/or obtained these photos to be irresponsible and actionable,” the rep continued. “We are attempting to determine the identity of the hackers and will pursue them aggressively. Their conduct is reprehensible.”

Fascinating what sort of things get hacked and leaked when a movie needs promoting, isn’t it?