Rocker Tommy Lee has issued a scathing smackdown on SeaWorld railing against the park’s treatment of whales. 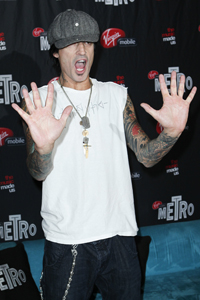 Tommy Lee and his ex-wife Pamela Anderson still have at least one thing in common: Their support of animal welfare. The former Motley Crue drummer has issued a rant against SeaWorld and their treatment of killer whales — specifically Tilikum, an orca responsible for the deaths of three people during his time in captivity.

Fittingly, Tommy Lee’s biggest concern seems to be that Tilikum is being sexually tricked into becoming a sperm donor — a fate worse than death to a rich rock star.

“After learning about the bizarre way you breed killer whales, my friends at PETA and I are stumped about SeaWorld’s announcement that no people will ever again have direct contact with Tilikum, the orca who has killed 3 people including his trainer this year. We understand that you refuse to release this frustrated whale because he is your chief sperm bank, and we know from SeaWorld’s own director of safety (as well as videos on the web) that the way you get his sperm is by having someone get into the pool and masturbate him with a cow’s vagina filled with hot water. Even during my wildest days with Motley Crue, I never could’ve imagined something so sick and twisted. Simply put, how can SeaWorld claim that trainers no longer have contact with this whale when they are jacking him off? That is about as ‘direct’ as it gets. I hope it doesn’t take another tragic death for SeaWorld to realize it shouldn’t frustrate these animals by keeping them in tanks.”

SeaWorld defended its practices, sort of. While they say the trainers don’t enter the water with Tilikum, they don’t deny he is their chief sperm donor — and therefore biggest money maker — and they totally gloss over the cow vagina bit.

A rep for the park said, “The process of collecting semen for [artificial insemination] doesn’t differ in any meaningful way from the techniques employed in managing livestock or other species for zoological display.”

“Contrary to the charges made by PETA and repeated in Lee’s letter, our trainers do not now nor have they ever entered the water with Tilikum for this purpose. The safety of SeaWorld staff and the welfare of our animals are our highest priorities.”

The rep added, “Whatever his views on SeaWorld, Mr. Lee would be wise to spend more time checking his facts.”

Neither party seems to be willing to discuss the innate humor in debating the masturbatory habits of a creature named “Tilikum.”