Portia de Rossi has turned down an offer to appear on Dancing With the Stars as half of the show’s first same-sex team. 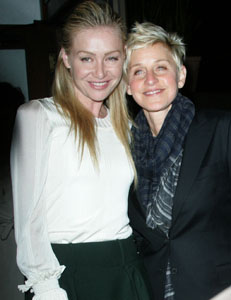 Portia de Rossi will not be on Dancing with the Stars next season — and neither will any other same-sex couple.

A source with ABC says after Portia turned them down, they weren’t able to come up with another non-offensive gay or lesbian to feature — ironic, considering the offensiveness of that very idea.

“If Portia had agreed then this would have been a done deal,” said the source. “She was the only star that could have pulled this off without completely offending the program’s conservative viewers.”

Portia de Rossi and Ellen DeGeneres have been a couple since 2006 and married since 2008.

So who will be in the cast next season? Don’t hold your breath for anyone too exciting — Bristol Palin screwed that up for everybody.

“After Bristol, I predict it will be the most boring bunch of stars ever cast next season,” said the source. “When you have a hit as big as this on your hands, everyone is scared to mess it up.”