The backup dancer who was smacked around by Demi Lovato, triggering an emotional breakdown that got the singer kicked off the Jonas Brothers tour and sent to a treatment facility, is threatening to sue. 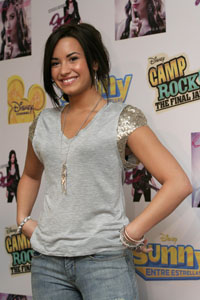 Alex Welch was attacked by Demi Lovato five weeks ago in an incident that resulted in the Disney star being kicked off the Jonas Brothers tour and sent to a treatment center for various emotional issues, including self-injuring, an eating disorder and obviously a pretty nasty little tempter.

“To this day, I haven’t gotten an apology. I’ve heard nothing,” Welch told People. “That’s sad if you think that person is your friend.”

Welch says Demi was upset that someone tattled on her for partying like a rock star the night before and suspected one of the dancers of ratting her out. Welch says if someone turned Demi in to the peeps in charge of the Jonas Brothers tour, it wasn’t her — but Demi apparently thought otherwise.

“We were on the plane with the Jonases having this awesome time and I didn’t get a call or text from Demi or a ‘hey, you got a problem with me,’ nothing,” Welch said. “And she walks up and punches me and literally walked away and got in her seat.”

The dancer suffered a black eye and a bruised cheek bone, but no permanent damage. Nevertheless, she hired a lawyer so she can cash in.

“We have contacted the Lovato camp and we are waiting for a response,” said attorney Donald Karpel. “If we don’t hear back, we will pursue litigation.”

“Alex is seeking a settlement, an apology from Demi and a donation made to a charity of her choice,” Karpel told RadarOnline.com.

A spokesperson for Demi Lovato said, “Demi’s attorneys have had an initial discussion with Mr. Karpel. They are exploring the possibility of an amicable resolution of this matter. We do not plan on making further public comments during this process.”