Glee got into the holiday spirit with a festive episode dedicated to Santa Claus — A Very Glee Christmas.

Glee recap: Brittany, there is a Santa Claus

Emma can’t bear to watch Mr. Schuester (Matthew Morrison) spend Christmas alone, so she invites him to her and Carl’s Christmas Eve party — yeah, his answer was a big fat no. To keep the bah humbug spirit of Mr. Schuester’s mood moving, he manages to pull Sue Sylvester’s (Jane Lynch) name in the Secret Santa exchange. 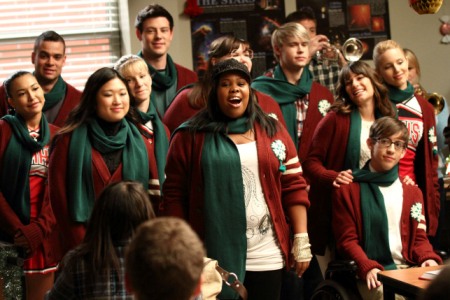 Finn (Cory Monteith) tries to get everyone into the holiday spirit by decorating a tree he found on the side of the road. One person who doesn’t need help celebrating the season of wonder is Brittany. She still believes in Santa and Artie wants to keep the magic alive for her. He and the other students take her to visit the fat man himself at the mall where everyone sits on Santa’s lap. Sam (Chord Overstreet) wants chapstick, Quinn (Dianna Agron) wants something to get rid of stretch marks and Brittany wants Artie to walk again — uh oh!

Rachel (Lea Michele) creates a winter wonderland out of the auditorium to try and get Finn back. She gives him her voice with love as a present. Finn’s totally not into it after she messed around with Puck (Mark Salling).

Mr. Schuester finds out Sue rigged the Secret Santa exchange so that everyone would have to give her presents. He pulls a fast one on her by finding a clause that says she misrepresented herself — he takes back all her gifts and vows to give them to the homeless kids of Lima via the glee club.

The kids try to get Coach Beiste to dress up as Santa Claus in order to convince Brittany that Artie won’t be walking on Christmas morning.

Sue dresses up as the Grinch and destroys the glee club’s Christmas tree and takes back her presents. Cue the best version of Sue singing You’re a Mean One, Mr. Grinch. The kids find their classroom in shambles but Finn and Rachel come together to try and get them a new tree and lift their spirits. Rachel still can’t convince Finn to forgive her. The words Gleeks can’t bear to hear coming from Finn were spoken: “I’m officially breaking up with you.”

Coach Beiste shows up at Brittany’s house dressed as Santa Claus, asking her for patience when it comes to Artie’s legs. Basically she breaks Brittany’s heart.

The New Directions come together to carol for the teachers of McKinley High, hoping to raise money for the homeless. It’s a Glee miracle, Artie can walk! Okay, not without some help. Brittany found a device from Santa — or Coach Beiste — under her tree that helps her man walk! It doesn’t matter who put it there, what’s important is that Brittany believes it was Santa and Artie can semi-walk with its help.

Sue brings the glee club to Mr. Schuester’s house so he won’t be by himself for Christmas. It really was A Very Glee Christmas!

A Very Glee Christmas was the last new episode until February! What will you do with your Tuesday nights until then?