Jessica Simpson makes news for her romances and foibles, as well as her acting and music career. It turns out Simpson’s competition in the fashion world should have been paying attention to her most marketable skill: Simpson is on her way to being a billion-dollar fashionista! 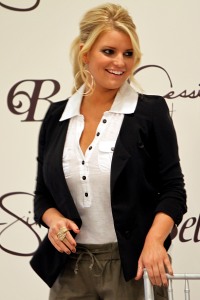 Shoes, clothes, accessories, fragrance and even luggage with Jessica Simpson’s name attached raked in $750 million this year, according to WWD‘s December 6 issue. That translates to big fashion bucks for the singer, actress and sometimes ditzy blonde, who is looking at a payday of about $1 million.

But wait, there’s more! The Jessica Simpson Collection is set to launch a new sportswear line next fall that will include jackets, bottoms, tops and dresses, all priced from $39 to $129.

“Since entering the fashion industry, I’ve envisioned including a sportswear line in my lifestyle brand,” said Simpson, who serves as her collection’s creative director, along with her mother. “This new sportswear line reflects my evolving style, which combines comfort, femininity and flirty fun.”

The upcoming line, coupled with Jessica Simpson Jeans, is projecting between $150 million and $200 million in retail sales over the next two years.

Madonna and her daughter, Lourdes, entered the fray with their Material Girl collection earlier this year and while Jennifer Lopez already has JLo and JustSweet, she and hubby Marc Anthony are set to launch a new collection soon.

Word is, however, none of these celeb lines have anything on the Jessica Simpson Collection. Perhaps the secret is in using Simpson’s name, instead of coming up with a new name to market and brand.

Vince Camuto, CEO of the company that owns the Jessica Simpson Collection’s master license, maintains the secret is in the celebrity, as well as her wares. “She is the girl next door and has great product that surrounds her,” he told WWD. “People like her. People look at her as a style icon.”

The man behind her jeanswear line, Jack Gross from the Jones Group, maintains Simpson has also been served well by her infamous foibles, which date back to when she was married to Nick Lachey and suggested Chicken of the Sea was chicken instead of tuna on their show Newlyweds.

Gross stated that “15, 16-year-olds and 40-year-olds like her. Sometimes she has missteps, and they identify with her.”

In fact, some have wondered if Simpson’s ditzy moments are a ploy to make her more relatable. Whether or not they come naturally, whether her films and albums deliver or flop, and even whether she proposed to Eric Johnson or him to her, one thing is certain: Billion Dollar Baby Jessica Simpson is proving to be one business-savvy fashionista!