Mel Gibson took a break from his bitter split with ex Oksana Grigorieva and spent Sunday doting over his baby daughter Lucia.

TMZ caught this photo of Mel Gibson spending time with his 13-month-old daughter Lucia. The two spent time together after church services in Malibu, California. 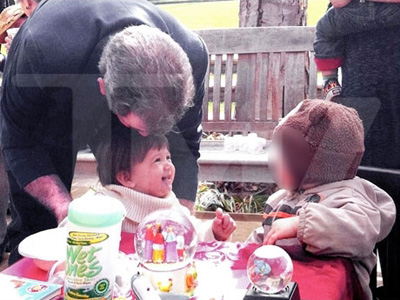 “Mel has so much fun when he is with Lucia. All he wants is as much time with his daughter as possible,” a friend tells People magazine.

Gibson is seen placing Lucia in a high chair and talking to surrounding friends as his smiling daughter looks on. 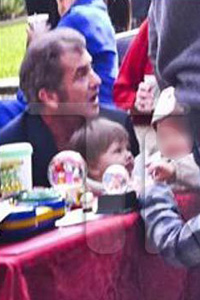 This is the first time Gibson has been seen out in public with Lucia since his bitter custody battle with ex-girlfriend Oksana Grigorieva. She reportedly wants Gibson stripped of his rights to having overnight visits with Lucia, as she reported her daughter came back “acting funny.”

TMZ reports that Gibson choked up on the stand talking about how much he loves baby Lucia and his other children.

As the bitter custody battle rages on, Gibson takes time out to enjoy father/daughter time.

Read on for More Mel Gibson