Your favorite stars have survived their digital deaths and will tweet another day. Alicia Keys’ Digital Life Sacrifice has reached its $1 million goal. 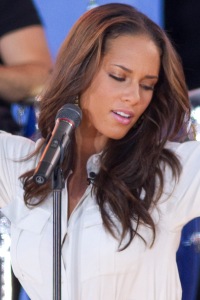 Ryan Seacrest, Lady Gaga, Kim Kardashian and the mastermind behind the campaign Digital Life Sacrifice, Alicia Keys, are back online and revealing their daily routines. Who do the stars have to thank for saving them from their digital demise? The fans, of course, but also one very special philanthropist.

When Alicia Keys rolled out the Digital Life Sacrifice campaign in conjunction with her charity, Keep a Child Alive, and World AIDS Day, the task was simple: Celebrities signed off of social media causing their digital deaths until fans raised $1 million to bring them back to life. It wasn’t so simple, however.

As the days passed, the goal meter seemed to creep at a snail’s pace, but all that changed on December 6. Alicia Keys announced that Digital Life Sacrifice and Keep a Child Alive had met the $1 million goal thanks to not only the fans but also philanthropist Stewart Rahr. Philanthropist Stewart Rahr generously matched the fans’ compiled donations of $500,000. Now, that’s paying it forward.

Now that Digital Life Sacrifice, Alicia Keys, and the fans have done their part for Keep a Child Alive and World AIDS Day, we can go back to flipping through the tweets of the Kardashian sisters or wishing Elijah Wood would return our Facebook messages. All it took was a goal, diehard fans and one amazing philanthropist.