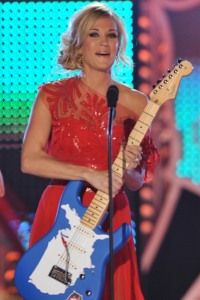 The American Country Awards aired live on Fox and when it came down to the fans’ choice for biggest winner of the night, one American Idol winner raised her Fender Stratocaster trophy higher than the rest — Carrie Underwood.

While Underwood has always been a fan favorite, we couldn’t help but wonder what happened to the momentum of country music’s latest lucky lady, Miranda Lambert? Lambert has been steamrolling the competition at every awards show lately, but Underwood’s six ACA trophies couldn’t be denied.

Artist of the Year – Carrie Underwood

Artist of the Year: Duo or Group – Lady Antebellum

Single of the Year – Need You Now/Lady Antebellum

Single of the Year: Male – Why Don’t We Just Dance/Josh Turner

Single of the Year: Duo or Group – Need You Now/Lady Antebellum