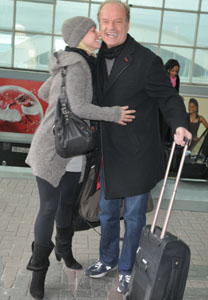 Kelsey Grammer is wasting no time: He is already engaged to flight attendant Kayte Walsh, and his divorce from his third wife Camille Donatacci Grammer is not yet final.

Kayte was spotted cruising through a Washington, DC train station with Kelsey on their way to the Kennedy Center Honors wearing a huge sparkler on her left hand.

“They are engaged. They never really announced it, they are very happy and very much in love,” his rep Stan Rosenfield told RadarOnline.com.

Kelsey, 55, and Kayte, 29, suffered a miscarriage earlier this year. Kelsey is still married to Real Housewives of Beverly Hills star Camille Grammer, who learned of her husband’s affair with the flight attendant shortly after he moved to New York to star on Broadway. They have been married for 14 years and have two children together.

Camille filed for divorce in July citing irreconcilable differences, but the case has yet to be finalized.