Brooke Mueller has checked into rehab a week after calling reports she had done so over Thanksgiving “ridiculous.” 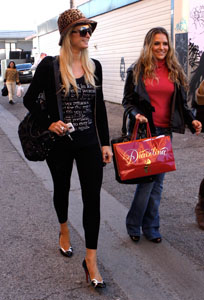 Charlie Sheen’s ex has checked into a “sober living facility” — i.e. rehab — a mere week after scoffing at rumors she had been forced into one by her family over Thanksgiving.

A source close to Brooke Mueller says Kathy Hilton dropped the longtime recovering addict off at the sober living house. Brooke is in the midst of filming a reality TV show with Kathy’s infamous daughter Paris Hilton. This begs the question: Why didn’t Kathy drop off Paris along with her pal?

Mueller’s lawyer confirmed to TMZ that she checked into the sober living house to “maintain her health,” and says she did not have a relapse and can come and go as she pleases.