Mel Gibson’s trailer for The Beaver debuted, begging the question: Can a Jodie Foster flick about a broken man finding redemption help Gibson find his own redemption after his infamously ugly rants? 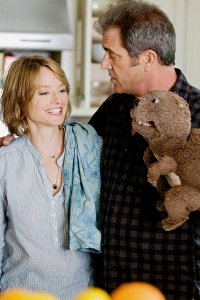 Fans are finally getting a peek at The Beaver, the Jodie Foster film that stars Mel Gibson as Walter Black, a “man who’s lost all hope” and finds himself again through a beaver hand puppet.

When Walter falls into a pit of depression and dysfunction, his wife (Foster) kicks him out and his eldest son (Anton Yelchin) is disgusted by him. Walter can’t seem to find a way out of his funk, until he starts communicating through a beaver puppet.

Strange as it seems, with the Australian-accented puppet speaking on his behalf, Walter seems to be on the road to recovery. Even as the family becomes hopeful, however, the Beaver insists the family man is gone for good.

The Beaver was originally slated for release this past summer, but that was postponed after Mel Gibson’s infamously misogynistic and racist rants to his ex, Oksana Grigorieva, went viral. The onslaught of bad press around his break-up and custody case forced Summit execs to put The Beaver on hold.

Now The Beaver is back on the schedule and set to hit theaters in spring 2011.

“Mel is an undeniably gifted actor and director, and The Beaver is one of his most powerful and moving performances,” director Foster told More magazine in September. “But more importantly, he is and has been a true and loyal friend. I hope I can help him get through this dark moment.”

Foster also previewed that The Beaver is about “how close we all are to mental illness and what you have to give up in order to save yourself.”

Many are wondering if this film could be a first step in Gibson saving himself, or at least his reputation, while The Beaver‘s producers are clearly hoping Gibson’s domestic dramas won’t affect his theater appeal.

Before the movie was given a new release date or the trailer landed, The Beaver and Gibson’s performance in it were already generating Oscar buzz. Tack on the fact that Gibson’s Apocalypto grossed $120.6 million after his first round of rants and the film certainly has a chance.

While the Oscar winner may hope to find the same redemption his character finds in The Beaver, however, it’s no surprise there is already a version of the new trailer that’s been spliced with the scandalous recordings of his vicious messages to Oksana Grigorieva.

Chime in and let us know: Would you turn out for a Mel Gibson movie with good buzz?