Mariah Carey and her baby bump hit Disney World to perform for the Disney Parks Christmas Day Parade and they’re coming to ABC too! Infamously sexy mom-to-be Mariah Carey went for subtle Santa style to bring holiday cheer to the Happiest Place on Earth and our TV sets. 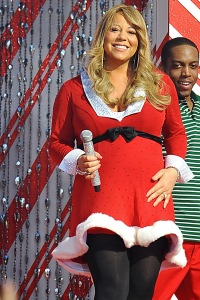 A very pregnant Mariah Carey ditched her usual skin-tight attire for sexy, festive baby doll dresses when she took the stage at Disney World Friday, December 3. The diva sang Oh Santa and All I Want for Christmas is You for Disney’s annual holiday parade.

As you can see from the image, Carey didn’t hide her growing baby bump. In fact, after Carey slipped up on Radio Disney, word is she’s actually showing off twins.

“I just hope that they don’t turn out hating Christmas!” was Carey’s radio slip — perhaps it’s even triplets!

“She was really energetic,” a source told People. “She had definite ideas about what she wanted onstage, and she was working really hard.”

In addition to working her famous vocal cords, Carey got her dance on with members of the Orlando Ballet and then stuck around to sign autographs.

“She wasn’t really talkative or anything, but she was really pleasant,” said one of the dancers. “She’s a real pro.”

Fans can catch a peek of Carey working her bump and singing Christmas tunes on ABC’s Disney Parks Christmas Day Parade, as well as in her upcoming special, Mariah Carey: Merry Christmas to You and her Extreme Makeover: Home Edition appearance.

The Disney Parks Christmas Day Parade will air on ABC Christmas Day at noon in most locations, but check local listings to confirm start time.

Ryan Seacrest held down the hosting duties at Walt Disney World Resort in Florida and while Mama Carey put on a show out there, her hubby, America’s Got Talent host Nick Cannon, was running the parade on the West Coast. Maria Menounos and Samantha Brown also did their parts.