Oprah Winfrey was among a short list of elite personalities honored at this year’s Kennedy Center Honors. 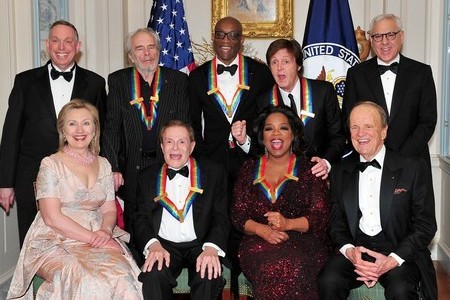 Celebrities from all walks of entertainment gathered in Washington D.C. with President Obama and Michelle Obama to celebrate this year’s honorees.

Among the stars paying tribute to Oprah Winfrey were her good friends Julia Roberts and John Travolta. “It’s a universal conversation starter: Did you see what was on Oprah today?” Roberts gushed. “The first time I heard of a better fitting bra or a fascinating politician named Barack Obama was on The Oprah Winfrey Show.”

John Travolta told a tale of a call he received from Winfrey after Hurricane Katrina ravished New Orleans. According to Travolta, his good friend simply asked for his help with providing a jet and medical supplies — and he did, with no questions asked. “So when Oprah calls, you answer,” he said. “Oprah makes it exciting to be responsible.”

Chicago’s hometown girl Jennifer Hudson stopped by to pay tribute to Oprah Winfrey with a stunning performance of I’m Here from The Color Purple. Winfrey made her role in the film an iconic staple before she went on to produce a successful Broadway version.

While much emphasis was placed on Oprah Winfrey, Paul McCartney got his own props from actor Alec Baldwin who stated, “The National Institutes of Health called the epidemic Beatlemania. There was no cure.”

Gwen Stefani and No Doubt paid tribute to McCartney by opening with Hello, Goodbye. Steven Tyler brought the house down with his performance of Abbey Road. “I’ve done a lot of things and been a lot of places,” Steven Tyler said. “But I’ve never been prouder than I am standing right here at the corner of Pennsylvania Avenue and Abbey Road.”

James Taylor and Mavis Staples ended the evening with Let It Be and Hey Jude. Congrats go out to all of this year’s Kennedy Center honorees.

read on for More Oprah