NBC’s The Sing-Off, which spawned last year’s a cappella winners Nota, returns to Monday nights on December 6 — and the timing couldn’t be more pitch perfect. 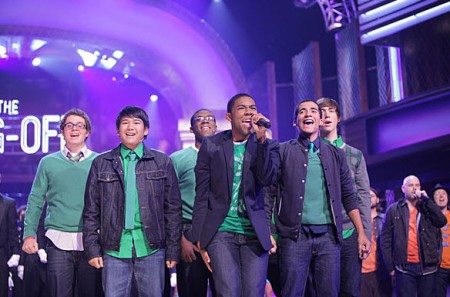 You might have noticed a familiar set of voices providing vocals for Glee’s newest group, the Warblers — The Sing-Off’s first season runners-up, the Beelzebubs. The Sing-Off is getting ready to introduce a few more winning voices in its second season as the reality show takes the nation’s top ten a cappella groups and challenges them to the ultimate sing-off — pun completely intended. The groups will take on some of the hottest songs and twist them up in a battle for a Sony Music recording contract and $100,000.

The groups will face a few more challenges in the show’s sophomore season. Due to the success of last season and the rise in popularity of a cappella music thanks to Glee, producers raised the competition from eight groups to ten — more talent means more variety! That also means the judges might have to be a bit more Simon Cowell about it all. As for the complexity of the routines we’ll see on The Sing-Off stage, host Nick Lachey recently told TVGuide.com that auto-tune would not be a factor. The Sing-Off is all about pure voices.