Manika is not saying that boys are dumb in her hit single, it is just that when it comes to love, their intelligence quotient needs improving. The singer has a hit single in Boyz R Dumb, a song that has resonated especially with girls, but also with quite a few very self-aware boys. “There are many boys who have listened to the song and told me that I’m right on,” Manika said to us in our exclusive interview. 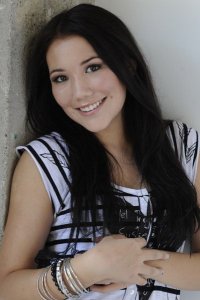 The singer is a multifaceted talent — Manika is also a children’s writer. Her first book The Exciting Adventures of Boo: Ten Tender Lessons arrived in stores this year. Her affinity for reaching our youngest citizens is also seen in her music. She tells SheKnows that she goes out of her way to connect with the youth of the world through words, both sung and written.

Don’t miss a chance to win an iPad, courtesy of Manika!

SheKnows: Where did the genesis come from for your hit single, Boyz R Dumb?

Manika: [Laughs] I got that through personal experiences. I’m not saying that they’re dumb. But, when it comes to girls, they can be slow [laughs].

SheKnows: What has been the reaction from the girls in the crowd playing the song live?

Manika: They’re usually like, “Finally, someone wrote about it.” It’s funny. It’s striking people that it’s true. Even the guys are feeling it. Sometimes they can admit they’re being dumb when it comes to girls.

SheKnows: You’re a young artist who knew what they wanted to do at an early age. Who were your early musical influences?

Manika: Growing up, my parents would play a lot of Alanis Morissette and Cyndi Lauper. They also listened to a lot of REO Speedwagon and Michael Jackson. I grew to love those musicians. Especially on my new tracks on my upcoming album that I’m recording, you can hear a lot of them.

SheKnows: I understand you’re working with a producer on this album that has worked with some of the biggest names in music. When you heard Qura Rankin was going to produce your album, what were your first initial thoughts and then once you got in the studio, how was the experience?

Manika: At first, I was jumping out of my chair excited [laughs]. Then, I didn’t know what to expect. He’s worked with all these people. Then, I got to the studio and he’s such a nice guy. He made me feel really comfortable. It’s really an honor, he’s so creative. I love when we’re recording, there’s a lot of back and forth.

SheKnows: You’ve played a lot for younger people, that’s so commendable. I don’t think a lot of artists think about the kids out there, other than those who play specifically for kids. What was the impetus for you to do that and what have you gotten out of that experience?

Manika: It’s great to see how a song comes from a place, and you add the guitar or whatever, and you finish recording it. Then you perform it live and you see how it inspires these kids, it’s so great how something that started with an idea can affect such young people.

Manika is on the move 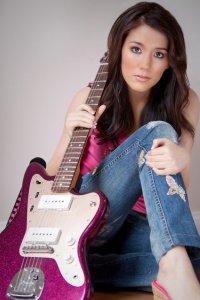 SheKnows: As somebody who is a fan of iTunes, what were your feelings when you first saw your song on iTunes? What does it mean to you?
Manika: I was excited when it first came on iTunes!

SheKnows: You’ve made it!

Manika: Yeah, that is my name up there to be downloaded — just amazing!

Manika: It’s really fun, it was honestly surreal. There’s a lot of prepping. You find a storyline, work with choreography and plan every shot in advance. It was amazing to see how much went into it.

SheKnows: Are you a little shy or did you like being on camera?

Manika: When I’m on camera or on stage, I totally explode. I’m out there and really comfortable.

SheKnows: As a songwriter, when did you first notice that you had that gift? When did you write your first song?

Manika: I’ve always been messing around, writing music, but I didn’t really know what I was doing. Probably three years ago, I started really getting into songwriting and getting serious about putting together a song.

SheKnows: The live performance, for you, is that something that is one of the best parts of your job?

Manika: Yeah, it’s incredible. I just got out of rehearsal with a choreographer for Michael Jackson’s This is It tour, so honestly, I was just blown away. I can’t wait for people to see it. Michael Jackson is just incredible. My favorite album of all time is the Bad album.

SheKnows: You said you were in rehearsal for performing live. Are you doing a tour, or just performing a few dates here and there?

Manika: I’m getting ready for a few events, and also I landed a role on a TV show that is in the early stages of production right now. I’m going to perform the songs on the TV show as well. So, I’m just getting ready for it all.