Harry Potter and the Deathly Hallows: Part 1 was dethroned by an unlikely box office hit — Tangled!

Disney’s fairy tale movie, Tangled, gave Harry Potter and the Deathly Hallows: Part 1 a run for its money at the weekend box office. 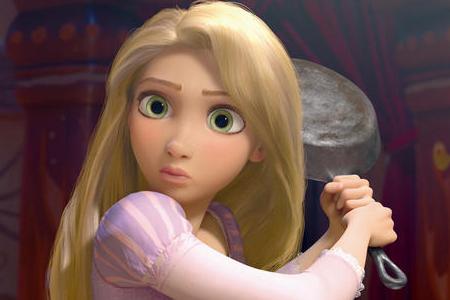 The movie that borrowed Grimms fairy tales’ Rapunzel and gave it that special Disney twist brought in an estimated $21.5 million in its second weekend, knocking Harry Potter and the Deathly Hallows: Part 1 to the number two spot with a weekend total of $16.7 million. According to Box Office Mojo, Tangled has raked in a gross domestic total of $96.5 million.

The enchanted tale of long-haired beauty Rapunzel, reportedly dropped 56 percent from its opening weekend even with its box office-gold second weekend.

Cher’s sexy Burlesque and Denzel Washington’s Unstoppable followed Tangled and Harry Potter with $6.1 million each. Love and Other Drugs came in at number five with $5.7 million. Rounding out the competition were Megamind at number six with $5 million, Due Date at number seven with $4.2 million, Faster at number eight with $3.8 million, The Warrior’s Way at number nine with $3 million and The Next Three Days brought up the rear at number ten with $2.6 million.

Can Disney’s Tangled continue to fend off Harry Potter and the Deathly Hallows: Part 1? Maybe with a little mouse magic, but the world’s favorite wizard has already grossed a whopping $244 million.