Wilson Phillips, which consists of Carnie Wilson and Wendy Wilson (daughters of Brian Wilson of the Beach Boys) and Chynna Phillips (daughter of Michelle and John Phillips of the Mamas and the Papas), will release a Christmas album titled Christmas in Harmony. This is their first album since California was released in 2004. 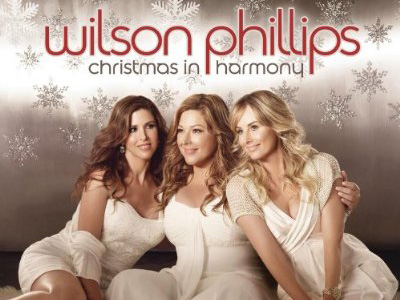 The group is famous for their beautiful harmonies and for this album they worked with Glen Ballard to produce both new and classic Christmas songs. The trio worked with Ballard on previous records and they were looking forward to working with him again. “I think there is a mutual respect that we all have for each other from all the years together and the success together. But creatively, I think it’s the same,” Wendy said.

What was the musical inspiration for the Christmas album? “I think his [Glen Ballard’s] inspiration is what he is currently interested in, which is jazz and rockabilly,” Wendy said. “We kind of incorporated that into the record, too. It’s really interesting because we have music that has a kind of Andrews Sisters vibe that we have never played with before, and it’s really fun.”

1. I Wish It Could Be Christmas Every Day
2. Little Drummer Boy
3. Warm Lovin’ Christmastime
4. When A Child Is Born
5. Christmastime
6. Silent Night
7. Santa Claus Is Coming to Town
8. Silver Bells
9. Sleigh Ride
10. Joy
11. Winter Wonderland
12. The Christmas Song
13. Our Prayer