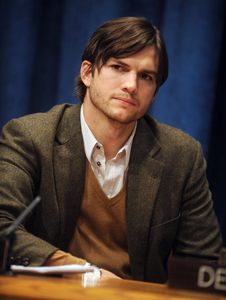 Brittney Jones said she had an affair with the husband of Demi Moore after the pair met at a bowling alley, and said she had sex with Ashton on the couch in the home he shares with Demi and her kids. Ashton and Demi stood united against the allegations.

In addition, Vivid issued a press release reading, “Ashton’s fans will undoubtedly enjoy seeing what the star himself may have experienced.”

Ashton’s legal team immediately fired off a letter to Vivid threatening legal action if his name is not removed from both the DVD and any promotional material, saying that any usage infringes upon the actor’s “marketable celebrity identity value.”

Vivid spokesperson Jackie Markham told RadarOnline.com: “We intend to release the video — only Ashton’s first name is on the cover.”

“The whole situation is now in the hands of our lawyers. But again we are planning to release the tape.”

The tape features Brittney Jones having sex with her current boyfriend.