Celebrities signed off of social media for Alicia Keys’ new campaign, Digital Life Sacrifice — but is that enough? Apparently, the campaign backed by Keys’ charity, Keep a Child Alive, needs us more than ever — and so do your favorite stars.

Digital Life Sacrifice took some of Hollywood’s biggest stars and asked their fans — do you want to see them back on Twitter or Facebook? If the answer was an easy yes, than the solution was even easier — donate — it’s that simple. Or is it? Turns out raising $1 million to bring Ryan Seacrest, Kim Kardashian and Elijah Wood back from digital death for charity is not as easy as it looks. 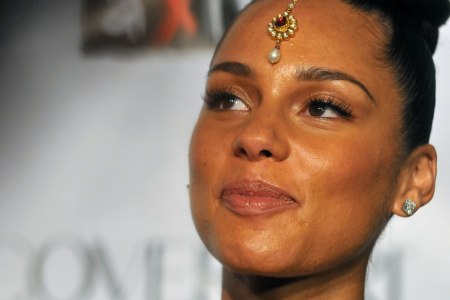 Digital Life Sacrifice was launched on December 1 — World Aids Day — as part of Alicia Keys‘ charity Keep a Child Alive. Despite the use of digital death coffins and “last tweet and testament” videos to promote the campaign, the funds meter is moving at a snail’s pace. Did the masterminds behind the campaign put too much pressure on the fans’ pocketbooks and overestimate their eagerness to see their prized celebs back online tweeting about their dinners and latest shopping trips? We’re not sure about that, but we do know that many of these stars, like Lady Gaga, have little monsters that barely get allowances these days and with a $10 minimum, there could be a snag in hitting their goal.

As of late Wednesday night, December 1, just about $70,000 had been raised leaving the stars still in their digital death coffins. Thursday evening, the second day of the campaign, looked a little better at $180,950 but still a long way away from their $1 million goal.

SheKnows cruised by the Digital Life Sacrifice website early December 3 to find the funds bar sitting at $183,298. That is not a big jump from overnight, but you have to start somewhere. That leads us to another question — how do the fans know what’s happening? Many young followers are more apt to go on social networking sites like Twitter to see what’s up with Lady Gaga, but they may not be interested in going to an informational website. Perhaps a Digital Life Sacrifice Twitter page dedicated to updating us on Ryan Seacrest’s digital death might have helped — maybe not — but it’s just a thought.