This week on The Vampire Diaries, some risked it all to keep those they love safe in an episode that could only be called, The Sacrifice — and trust us, it was a sacrifice if you missed it.

Elena, still reeling from the realization that her and her friends are doomed, decides she will give herself over to Klaus or whoever wants her first rather than sacrifice her friends and family. She uses Rose as her messenger to put the word out to the other vampires who may not even have ties to Klaus — we shall see who turns up. 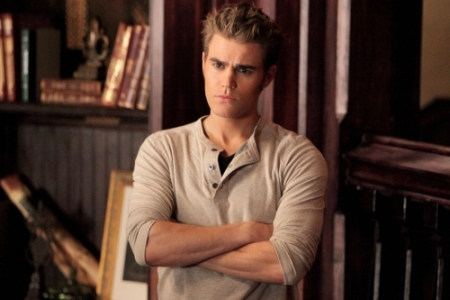 Damon (Ian Somerhalder) catches wind of Elena’s not-so-brilliant plan and freaks. He vamp blocks her efforts to turn herself over but it may be too late. The vamps want Elena and they want her now. Damon prepares to take his last vampire breath protecting Elena but he’s stopped short when Elijah swoops in and saves her. How did this happen? He found Elena with a tracking spell of Jonas’. Of course he doesn’t stay, instead he leaves everyone stunned. Turns out Jonas and Elijah may have their own reasons for wanting Elena alive — at least for now.

While Elena is practicing self sacrifice, Jeremy is sacrificing more than himself. Out to prove that he’s a bad-ass, Jeremy (Steven R. McQueen) heads to the tomb to get the moonstone himself — bad move. Before he can get out, Katherine nabs him and turns him into her own personal blood bank. I know what you’re thinking — no the ring can’t save him in this situation. He won’t die, but it won’t be pretty either.

This leads us to Tyler (Michael Trevino) and Caroline (Candice Accola). The two new best buds find Mason’s diary and a secret flash drive with a video of Mason’s first werewolf transformation on it. Just as the two are growing closer, Matt shows up and wants Caroline back. Too bad Tyler’s around.

Bonnie (Katerina Graham) and Stefan (Paul Wesley) arrive at the tomb just in time to find Jeremy with Katherine. Even with Luca’s powers fueling Bonnie, she can’t break the seal and get Jeremy out. Stefan makes the true ultimate sacrifice, running into the tomb and saving Jeremy, sealing himself inside in the process. 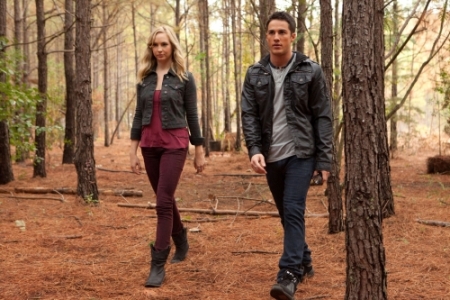 In a weird move, Bonnie and Jeremy leave the tomb and a trapped Stefan and almost get it on before Bonnie stops them. Okay, there’s a Salvatore sealed in the tomb, this is not the time to be making out.