The stars turned out in droves Wednesday at the Friars Club Roast of Quentin Tarantino. 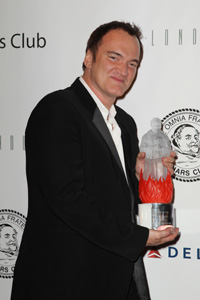 Kill Bill star Uma Thurman talked about stories from the Kill Bill set and teased Tarantino about his foot fetish — and even made him drink wine from her shoe, reported The Hollywood Reporter.

Sarah Silverman celebrated her 40th birthday at the roast — and told the audience that Tarantino turning down directing Speed was “the first time he ever turned down speed.” Kathy Griffin talked about dating Tarantino and Harvey Keitel told him he was “the most inglorious looking bastard.”

John Travolta was noticeably absent, causing Rob Schneider to poke fun at Scientology — and his sexuality, saying, “There was a ‘(Expletive) in Denial Who Believe in Aliens’ convention.”

Jeffrey Ross joked about Tarantino’s love of foreign films, saying that “his last name is an old Italian word meaning plagiarism.” He ended his roast on a high note, saying, “Thank you for making all us movie geeks seem a little cooler. You changed the face of cinema. I just wish cinema would return the favor.”

The Quentin Tarantino roast will air on Comedy Central, however, no date has yet been announced.

Also check out: The roast of David Hasselhoff.