Ann Ward, 19, beat out Chelsey Hersley to nab the title of America’s Next Top Model. “When I saw that I was the winner, I really choked up,” she told UsMagazine.com. “It was really emotional for me because I’ve been through a lot. I wasn’t expecting to win. It totally caught me off guard.” 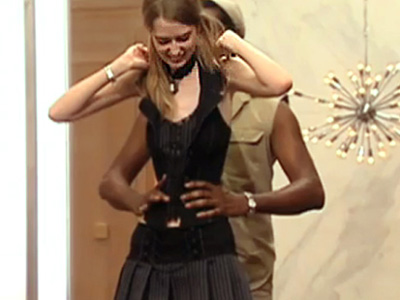 Ward came under scrutiny in August after the show aired in which Miss J Alexander put his hands completely around her itty-bitty waist. “You have the smallest waist in the world,” Tyra Banks said. “Look at that waist!”

Tyra went on to apologize for the “style in which the Top Model promo clip was presented.”

The 6-foot, 2-inch Ward is not letting the scrutiny get her down. “I feel way more confident than before, but I know that I have more work to do,” she said.

Ward won a modeling contract and photo spread in Italian Vogue, as well as a $100,000 Cover Girl cosmetics contract.

“I’m going to invest in my career. Like, going to New York or wherever they want to take me. I don’t want to blow it. I might splurge on video games because I’m a nerd like that,” Ward says.