Glee‘s Lea Michele is a triple threat! But don’t take our word for it — just ask the folks over at Billboard who are honoring the star for her countless talents. 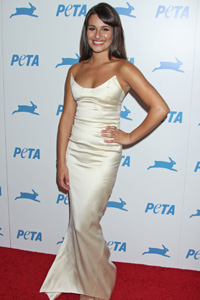 Lea Michele is featured day in and day out as a mega-force on the hit show Glee and it hasn’t gone unnoticed to Billboard. She’s done it all from Broadway to the small screen and Billboard wants to shout it from the rooftops of New York!

According to the Associated Press, Billboard will present the actress with the “triple threat” award during the Billboard Women in Music luncheon December 2 in New York. The luncheon will also honor the Black Eyed Peas’ fierce Fergie.

For those of you not familiar with the term “triple threat” it exemplifies Lea Michele. She acts, sings and dances — what can’t she do?

“We work so hard over here at Glee and we put together these mini-movies every week that is filled with dancing and singing,” Michele gushed to the AP. “It feels like such a nice sort of wonderful recognition.”

Glee has been dominating the Billboard charts left and right, mowing down anyone who dares get in their way — even the Beatles. As for her own album, Michele is taking it all in stride. “I really am taking my time with making an album. It will be somewhere in my future but right now we are so busy over here. I feel like I’ve already sort of made albums,” the star explained in regards to her success on Glee.

Congrats go out to Lea Michele for being Billboard’s “triple threat” recipient!