Jessica Simpson says her new fiancé shocked her with his proposal, and offered new details of the surprising moment! 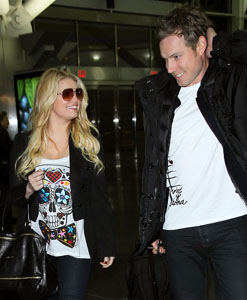 Jessica Simpson surprised her fans when she showed up to a promo event wearing a huge ruby engagement ring mere days after her ex-husband Nick Lachey announced his own engagement. Now Jess is spilling the beans on how it all went down.

Jessica says that despite this being a second marriage for both herself and fiancé Eric Johnson — his own divorce was just finalized in October — they plan to do things right this time around.

“We have both already been there and done that and I think we want something more intimate and for us,” Jessica Simpson said. “He is incredible to be around. I see him doing a lot of things with his career and his health and he is really an amazing guy.”

And as for Nick Lachey? “…I have not spoken to him in five years,” she said. “I definitely wish him well and him and Vanessa are perfect together.”