Star magazine is reporting that Britney’s boyfriend, Jason Trawick, has been abusing her. 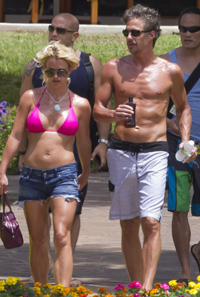 Britney Spears and her boyfriend of a year, Jason Trawick, seem happy together – but Star magazine says it is all a show and that Trawick has been physically abusing her. The magazine also reports that Britney was pregnant with his baby and had an abortion.

Is it true? Let’s consider the source: Jason Alexander. He is the guy Britney was married to for 55 hours in Las Vegas and he is claiming that Britney told him that Trawick “beat on me.” Is he possibly looking for 15 more minutes of fame?

RadarOnline does claim to have an audio clip of the reported conversation between Britney and Alexander in which she confesses that Trawick is abusive.

Larry Rudolph, Britney’s longtime manager, told Access Hollywood that it is “100 percent not her” on the audio tape. “”Lawyers are amassing. We are 100 percent taking stern and immediate legal action.”

Sources tell People that they also believe the abuse rumors are false. “Jason has never been abusive to Britney,” says one close source. “Britney has in the past been very difficult and has had tantrums around Jason, but he was and is nothing but patient with her.”The couple’s relationship is better [than ever]. Britney and Jason lately have been very happy together.”

Listen to the alleged recording on Radarline and tell us what you think!