Derek takes Cristina fishing on Grey’s Anatomy: Adrift and at Peace tonight, December 2. Scott Foley guest stars as a patient who may lose his life because he has no health insurance and Rescue Me‘s Daniel Sunjata plays a nurse who pulls rank on Lexi.

The doctors of Seattle Grace are still clueless about how to help Cristina get her groove back on this week’s Grey’s Anatomy, but Derek remains confident they should let the former surgeon be still and recover at her own pace. To that end, he takes his wife’s twisted sister on a fishing trip for some soul-searching peace. 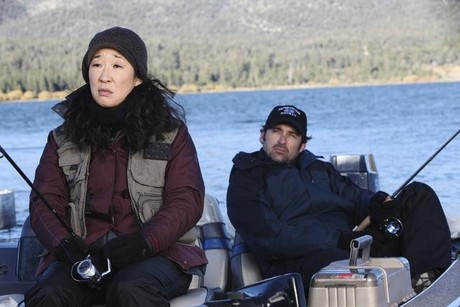 Meredith isn’t thrilled with the plan, but desperate Owen can’t think of a better idea. Cristina’s issues are clearly getting the best of them, even leading to a confrontation in the OR.

It turns out, however, that the prospect of fishing brings out Cristina’s type-A tendencies, while the peace and quiet just make her want to talk. Perhaps Derek’s idea will work, even if not in the way he hopes.

Meanwhile, unable to help Cristina, Teddy pours her attention into a patient, played by guest star Scott Foley. He’s bursting with life, full of hope and humor even as he’s fighting death. Unfortunately, he doesn’t have insurance, which means he can’t get the treatment he needs to win that fight.

A bit of fistula competition gets the best of Lexi. She even loses her patience with a nurse (Daniel Sunjata), but with 12 years under his belt, he pulls rank and puts her in her newbie place. Angry tension like that portends one definite possibility: Is a new romance in the cards for the younger Dr. Grey?

Tune in to Grey’s Anatomy: Adrift and at Peace tonight, December 2, on ABC at 9 pm, to find out.

Watch a clip of Grey’s Anatomy: Adrift and at Peace: