Glee pitted friends against friends this week on the road to nationals with the first stop at sectionals.

It’s that time again — Glee heads to sectionals. The first order of business in this week’s episode, Special Education, was the set list. 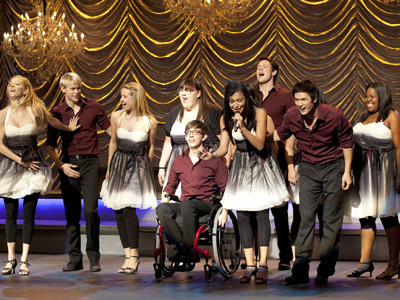 Glee: Sectionals pressure is on

Mr. Schuester (Matthew Morrison) tries to connect with Emma by making her the plus one on his sectionals ticket, but instead of jumping for joy she rambles on-and-on about the New Directions predictability and the competition they’ll face in the Warblers and the Hipsters. Mr. Schuester decides it’s time to shake things up in order to win sectionals and that means dance solos by Mike and Brittany, duets featuring Sam (Chord Overstreet) and Quinn (Dianna Agron) and silencing Rachel (Lea Michele). Mr. Schue’s new direction causes Rachel’s jealousy to sky-rocket fueling Santana to spill her and Finn’s (Cory Monteith) dirty secret — they did the deed last year. Rachel makes Finn see Emma for couple’s counseling but it doesn’t work so she turns to Puck (Mark Salling) to make him jealous.

Kurt (Chris Colfer) makes his way down the hall of Dalton Academy to the sweet tune of high fives as he’s officially welcomed as a Warbler — but he soon finds out it’s not what he thought. They ignore his suggestions for a sectionals set list but Blaine (Darren Criss) lifts his spirits with an audition for a solo.

Brittany can’t take the pressure of dancing in the spotlight so Artie gives her a magic comb, convincing her it’s full of luck. Puck is brought on as the new ambassador for the glee club and is forced to recruit a new member to replace Kurt. When he tries to get the football team to join the glee club he ends up locked in a port-a-potty for 24 hours straight.

Glee: Jealousy on the rise and it’s showtime

Tensions begin to rise between the McKinley High couples especially when Tina begins whispering in Artie’s ear. She’s convinced Mike and Brittany are getting it on during their dance practices and it doesn’t help when Brittany cancels a movie date with Artie.

Kurt stops by to get help with his solo audition from Rachel. Commence the first amazing performance of the night in the form of the two belting out Don’t Cry For Me Argentina. Unfortunately, Kurt is faulted for trying too hard and Blaine begs him to relax. Kurt heads to sectionals minus a solo.

Emma decides not to accompany Mr. Schuester to sectionals in order to make Carl (John Stamos) happy. She admits to Mr. Schuester that she loves the dentist and he loves her back.

Finally, the teams arrive at sectionals. The Hipsters are more like the broken hipsters. The Hipsters are a glee club made of older folks who were not that good at all. Nice play Glee, nice play. On to the real competition. The Warblers front man Blaine leads his glee troupe through a spectacular version of Train’s Hey Soul Sister (check out a sneak peek of it below).

Before the New Directions can go on everyone blows up backstage. Rachel and Finn get into it over Finn’s sex romp, Brittany and Artie rumble over her rehearsals with Mike — it’s crazy. Mr. Schuester begs them to come together and in the funniest moment of the night, Brittany hysterically admits that she didn’t cheat on Artie — she lost his magic comb!

It’s show time. The McKinley High New Directions pull out all the stops with Time of My Life from Dirty Dancing! Yeah, they went there and it was ah-ma-zing! They quickly left the Warblers in their dust with a transition to Brittany and Mike’s dance solo to Valerie with Santana on the mic!

GLEE: THE SECTIONALS WINNER IS…

We pretty much knew the Hipsters were not walking away as sectionals champions. New Directions and the Warblers tie — they both go to regionals!

Emma breaks the news to Mr. Schuester that she married Carl over the weekend. Meanwhile, Finn and Rachel make up but she tells him that she wanted to make him jealous so she tried to get with Puck before they made up. Finn breaks up with her. That’s what you missed on Glee!

Will Finn and Rachel make up? Can Puck stay out of juvie? What about Kurt and his new pal Blaine, is there more to their story? Stay tuned to find out this season on Glee.