Keith Urban’s battle with addiction has made headlines before, but this time, the country star was the one talking. Urban opened up about addiction, sobriety and loving Nicole Kidman on The Oprah Winfrey Show. Kidman chimed in on their love story. 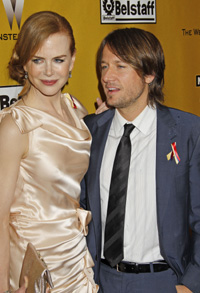 Keith Urban has done three stints in rehab, the most recent of which came just four months after he married Oscar-winning superstar Nicole Kidman. With four years of sobriety and marriage under his belt, Urban credits Kidman’s love and an intervention staged by her and their friends for helping him get sober.

“It was really a profound moment in so many ways,” Urban told Oprah of the intervention. “The way in which Nic handled that moment was just perfect. Everything was just designed, I believe, for that moment to fuse us together.”

Having gone “off the rails” with his cocaine, alcohol and drug use, Urban went to rehab that night, canceling a scheduled tour stop. He admits, however, that he feared the stint would “destroy” his brand new marriage and still can’t believe Kidman stayed with him after learning of his addiction.

Urban contends that this time, thanks to Kidman’s love and the love he’s found for himself, sobriety feels different.

“I had to make a decision which road I was going to take, once and for all,” Urban said. “I’d been at that crossroads before and always taken the wrong road.”

The country superstar also raved to Oprah about how much he’s learned from his wife and shared his memory of meeting Kidman backstage at a 2005 Aussie event in Los Angeles.

“I swear to you, she glided across the room, like floated,” Keith said. “I don’t know how she did it. It’s like she’s standing there, and she didn’t walk. It was out of this world.”

Nicole Kidman also spent some time with Oprah on Monday and got to share her side of the love story.

“I think marriage is about every day, trying to make it better and working through things and when things are tough, saying, ‘I’m going to come to you and talk,'” Kidman said. “We’re just very tight, and we stay really tight.”

Kidman also gushed about their two-and-a-half-year-old daughter Sunday “Sunny” Rose and life in Nashville, where an Oscar winner can do normal things like go for a hike or hit the local grocery store.

“It’s a very, very easy existence for us,” Kidman said. “Some people like the much higher sort of more glamorous lifestyle. For us, we just prefer a much quieter, private [one].”

With a couple like Keith Urban and Nicole Kidman, there was some business talk to get to, as well. Urban’s new album, Get Closer, is out now; while Kidman is producing and starring in Rabbit Hole, a drama due for limited release December 17.