An emotional Nancy Grace called into her own show on Monday, November 29 and shared the news that she is recovering from surgery and a serious cancer scare. 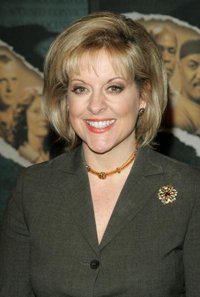 “A lot has happened in the last two weeks,” Nancy Grace said via telephone. “I was on the air just a few weeks ago and just celebrated John David and Lucy’s third birthday, and we were so happy. The next day I had a doctor’s appointment.”

Grace considered skipping her pesky date with the gynecologist. It was a “routine” appointment just a few months after her last one. A “hunch” convinced her to follow through, however, and as it turned out, a nurse spotted something during Grace’s ultrasound.

“It’s that moment that you see in movies and you hear about that always happens to someone else, but not you,” Grace recalled. “We were talking about where our children might go to school and all of a sudden, she stopped talking.”

After Grace’s doctor had a look, he moved the conversation to his office.

“He told me they had discovered a solid mass and it could be cancer,” shared Grace. “It just seemed like the world just stopped.”

Of course, the world never stops and Grace fulfilled her hosting duties on HLN for a week, while anxiously awaiting surgery.

Grace checked into Northside Hospital in Georgia on Tuesday, November 23. There were complications during surgery, but the solid mass that caused the scare was not malignant and Grace is on the mend.

Grace urges women to get checked

During her emotional call into her show, Grace spoke of her fears, as well as the support she received from family and prayer. She also urged women to keep up on their checkups.

“Please, ladies, go to your doctors,” Grace said. “I was the lucky one.”

Nancy Grace’s doctor warned she will be out for “a long, long time,” but Grace has “faith” she’ll be back at work next Monday.

Nancy Grace reveals her own secrets