Lily Allen is striking out at a Daily Mail reporter for using her recent miscarriage as fodder for fake news. 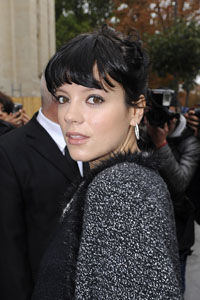 Lily Allen is super ticked at Katie Nicholl, a reporter for the Daily Mail who wrote a gossip story saying Lily and boyfriend Sam Cooper are planning a winter wedding. Why did this strike such a chord with Lily? It could have something to do with the fact that the piece was titled A New Year wedding to ease Lily Allen’s baby grief.

The Brit singer, fresh out of the hospital after suffering sepsis following the tragic miscarriage of her six-month pregnancy, immediately ripped Nicholl a new one on Twitter.

“Katie Nicholl you’re a lying [expletive], leave me out of your [expletive] column, you know nothing,” she wrote. “I’m sorry, but there’s a time and a place for disrespectful, badly researched or just made up journalism. It’s not now Katie Nicholl.”

Lily later replaced those two tweets with these:

“Kati Nichol [sic] has been in touch and has threatened to consult her lawyer if i don’t take that tweet down. She thinks it was too heavy handed.”

“Katie Nicholl I THINK you’re a [expletive], leave me out of your [expletive] column, you know nothing about the intimate details of my life. theres a time and a place for your musings where i’m concerned, and it’s not now.”

read on for more lily allen

33 mins ago
by Louisa Ballhaus