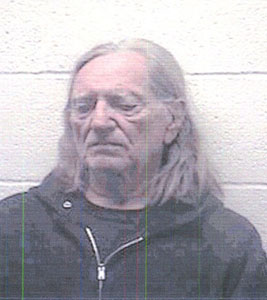 Willie Nelson was arrested the day after Thanksgiving when Border Patrol agents at a Texas checkpoint found six ounces of marijuana in the singer’s tour bus.

Nelson was traveling from California to Austin, Texas for a stop on his concert tour. He was taken to Hudspeth County Jail, where he was charged with a misdemeanor and released after posting a $2500 bond.

Check out the drug problems of other stars

This isn’t the first time Nelson has been busted. In 1997, Nelson was busted with a joint in the ashtray of his car. In 2006, Louisiana state troopers found pot and ‘shrooms in his magical mystery bus, but Nelson got off relatively easy with six months of probation. This time, the penalty could be much stiffer.

“If the Texas prosecutors do not reduce the charges, and the marijuana’s weight is indeed six ounces, then he is dealing with felony and a potential minimum of 180 days in a county jail and a maximum of two years, with a $10,000 fine,” former California-based prosecutor Robin Sax told FOX News.

“One of the issues that the court and prosecutors will look at is his prior record and given the fact that he has several arrests, even recent ones, for pot related crimes, I would not be surprised if Texas decided to stick it to him,” Sax said.