Charlie Sheen’s most recent ex-wife Brooke Mueller did not spend Thanksgiving in rehab, despite reports she was forcibly taken away after walking around LA in her PJs. 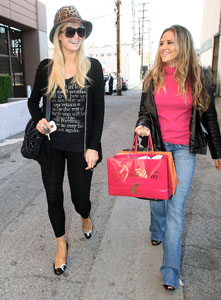 Despite spending lots of time lately with Paris Hilton, the stresses of Charlie Sheen’s shenanigans and her bizarrely disheveled appearance in LA over the weekend, Brooke Mueller wasn’t shipped off to rehab — nor are there any plans to do so, despite having been in the past.

In fact, Brooke’s mom says the whole story is ludicrous. “Brooke is fine,” said Moira Mueller. “We arrived at the hotel (Farmer’s Daughter) with Brooke on Thanksgiving morning to see my sister who was in town for the holiday… We were going to go out for coffee, but decided not to. The whole thing is just ludicrous, to suggest it was anything else is just insane.”

Brooke was photographed leaving that hotel on the morning of Thanksgiving in her pajamas, escorted by a rather intimidating-looking man. The rumor mill swirled with chatter that Brooke was being whisked off to rehab so fast she couldn’t even change her clothes.

“I did not go to rehab. The story is ridiculous,” Brooke told UsMagazine.com. “I am healthy and happy.”

Brooke, who is in the midst of a divorce from Charlie Sheen, is currently filming a reality show with Paris Hilton to air on Oxygen.