Hollywood has lost a truly talented actor and an all-around genuine guy with the death of Leslie Nielsen.

Leslie Nielsen, the man who spawned a comedic legacy with the hit Airplane! and the Naked Gun franchise, has died at the age of 84. 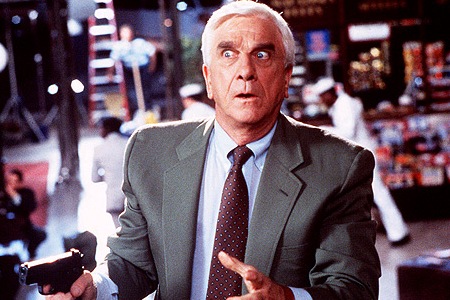 Nielsen’s agent, John S. Kelly, confirmed the news that Nielsen passed away at a Fort Lauderdale hospital on Sunday, November 28. The actor was being treated for pneumonia at the time of his death.

Leslie Nielsen found fame early in his career working on stage and television in New York City. The six-foot-two actor, with looks to boot, took on a variety of serious dramatic roles in live TV dramas before ditching the small screen and moving to Hollywood in the 1950s to try his hand at the big screen.

Nielsen was known around the Hollywood movie circuit as a dramatic actor, but his comedic side and love of pranks off camera quickly became apparent to those around him. He channeled his love for laughs into the 1980 hit Airplane! by originating an iconic role in an iconic film. Nielsen then went on to play everyone’s favorite detective, Frank Drebin, in the Naked Gun hits.

Leslie Nielsen was a global celebrity and made cameos and spoofed himself over the years. He was marking 60 years of success in the television and movie industry when he died. Our condolences go out to those closest to Leslie Nielsen. He will be missed.