Celebrities have signed on to social media to give back, and now they’re signing off in that same vein. Some of the world’s biggest stars, including Lady Gaga and Justin Timberlake, are signing off to raise money for Alicia Keys’ new campaign, Digital Life Sacrifice. 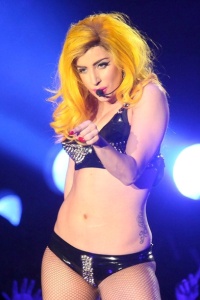 On December 1, Lady Gaga and Timberlake will join Usher and an army of celebs to sign off of social networking sites as part of a new campaign known as Digital Life Sacrifice.

Digital Life Sacrifice is part of Alicia Keys‘ charity Keep a Child Alive and the singer herself will be logging off to over 2.6 million Twitter friends. The campaign will also be launched as part of World Aids Day. “It’s really important and super-cool to use mediums that we naturally are on,” Alicia Keys stated.

In order to promote awareness for Digital Life Sacrifice, “last tweet and testament” videos will be featured of the stars in their “digital death” coffins.

Keys added, “This is such a direct and instantly emotional way and a little sarcastic, you know, of a way to get people to pay attention.”

Of course when you’re dealing with A-list celebrities, conflicts and scheduling get in the way — but not when it comes to a cause. Keys said, “Once I got people on the phone and I was able to paint the concept for them, everybody was in.”

President and co-founder of Keep a Child Alive, Leigh Blake, believes one special monster could make all the difference — not that everyone isn’t important to the cause. “I have a feeling that [Lady] Gaga is going to raise it all by herself,” Blake said.

Lady Gaga is a Twitter force with 7.2 million followers but that’s not all. The fame monster has an estimated 24 million Facebook friends. Blake reasoned, “She’s got a very, very mobilized fan base and that’s beautiful to watch I think (and) she’s able to draw their attention to these issues that are very important, you know, and that people follow it and act.”

Keep a Child Alive, founded in 2003, leaves no stone unturned when it comes to donating methods and Digital Life Sacrifice. That includes taking donations through text messages and bar-code efforts. Money raised goes to families who have seen the first-hand effects of HIV/AIDS in Africa and India.

“We’re trying to sort of make the remark: Why do we care so much about the death of one celebrity as opposed to millions and millions of people dying in the place that we’re all from?” Leigh Blake explained in reference to the campaign’s agenda. “It’s about love and respect and human dignity.”

Being a new mom to son Egypt has certainly opened Alicia Keys’ eyes even more when it comes to humanity. “As a human being, you deserve to have a chance at life,” she said.

Want to see your favorite stars log back on to Facebook or Twitter once December 1 hits? It’s simple, donate in the name of Digital Life Sacrifice.