Justin Bieber is a force to be reckoned with and as such, Bieber is a big influence on the nation’s youth. He is using that power to change hearts and minds as he has recorded a new anti-bullying PSA.

Justin Bieber has probably run into his fair share of haters as a successful 16-year-old artist with the world at his feet, but as you’ll see in his new PSA, Bieber does not take bullying lightly. 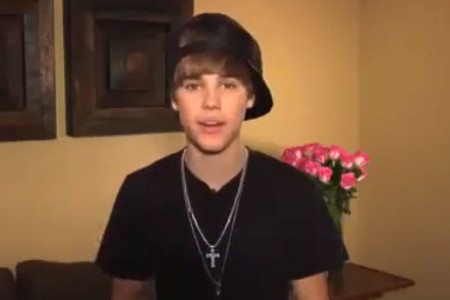 The recent winner of the AMA Artist of the Year award is the latest celebrity teaming up with the It Gets Better project to take a stand against LGBT bullying. Bieber may or may not be speaking from experience — after an incident at a laser tag center got blown out of proportion. Regardless, he’s still lending a hand.

In the PSA for the It Gets Better project, Justin Bieber gets serious telling viewers point blank that it’s “not cool” to be a bully. Biebs even taps into a sensitive subject that has long been debated. What do you do if you see somebody being bullied?

Justin Bieber reminds bystanders to help those being bullied and reminds those being bullied it’s okay to speak up. Wow, maybe it’s his ability to relate to being a teenager himself, but it’s nice to see the youth of entertainment getting real for a moment.

Justin Bieber isn’t the only one doing their part to take a stand. Ryan Murphy has been laying out amazing storylines over at Glee dealing with the very subject plaguing the nation. Bravo to all those taking a stand because it truly does get better.

Justin Bieber’s It Gets Better PSA!