Thanksgiving hits the ABC Wednesday night comedy lineup November 24 with a Heck men reunion on The Middle, meanwhile on Better With You, Maddie and Ben are exposed as thieves. Also, Jules drops the L-word on Cougar Town and on Modern Family, Cam’s mom comes to town!

The Middle of Thanksgiving

First it’s a Heck family reunion on The Middle: Thanksgiving II. When Mike invites his tent-living brother, Rusty (Norm MacDonald), and their injured father, Big Mike, over for the holiday, Frankie (Patricia Heaton) tries to get the macho guys to open up and talk. Brick is excited to spend time with Bob’s librarian girlfriend, Linda, and Sue is likely to be more sorry than thankful when she convinces Frankie to start a new mother-daughter pie-baking tradition this year. 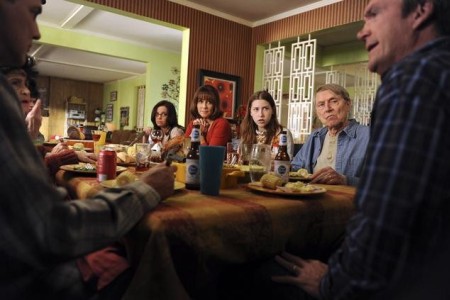 Better with You Thanksgiving

Then at 8:30 it’s Better With You: Better with Thanksgiving and this year, the family is beyond thrilled about having a normal turkey for a change. Vicky is known for torturing her clan with concoctions like licorice turkey and maple syrup turkey stuffed with shrimp and raisins, but a broken oven puts the kibosh on a new 2010 recipe. Maddie and Ben jump on the opportunity to steal the holiday, but that backfires on the couple when Mia comes across grandma’s “stolen” wedding ring in their linen closet. These two have some ‘splainin to do!

Cam’s mom (Celia Weston) comes to town on Modern Family: Mother Tucker. It turns out big Cam is a total mama’s boy, so it’s hard for Mitch to admit their visitor makes him uncomfortable. Over at Jay and Gloria’s house, Gloria thinks Jay’s overreacting about his stomach ache, like a typical American. Things escalate after Manny visits a medical website and Jay ends up at the hospital. Claire tells Haley to break up with Dylan and when she actually does it, Phil doesn’t take the split well. 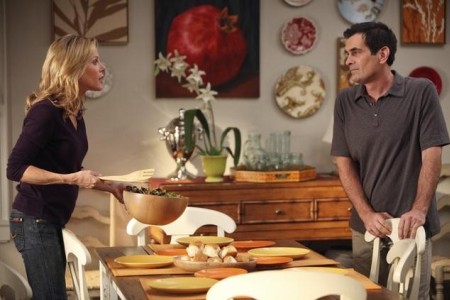 A Cougar has to eat, too

Finally, Cougar Town takes on a touchy subject in When the Time Comes at 9:30. Bobby is crushed to learn the cul-de-sac crew can’t always understand him and Jules and Grayson hit a crossroads after running into Grayson’s ex. Jules drops the “I love you” bomb on Grayson for the first time, but Grayson doesn’t return in kind. Jules is determined to get him to say the magic words, so she plans a romantic Thanksgiving feast to coax them out. Meanwhile, Ellie and Laurie stop warring and team up to take down Andy. They’re sure if anyone can knock the optimism out of him, it’s them.

The laughs start at 8 pm on ABC.