Ryan Seacrest and Julianne Hough are getting romantic in Paris. Should we be expecting an engagement announcement from Seacrest and Hough? 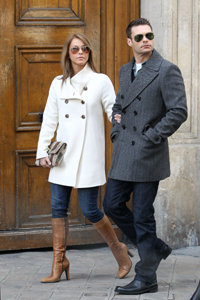 American Idol host Ryan Seacrest, 35, and former Dancing With the Stars dancer Julianne Hough, 22, have been spotted all over Paris together. The duo reportedly took in the Paris sights with Seacrest’s parents and sister during the day and then had an ultra romantic dinner that night.

Even though the couple had been secret about their relationship in the past, they have decided to take it public. “I could not be happier,” Hough told People. “Everything is wonderful. We are very compatible.”

Even though Hough just finished filming Footloose and is promoting Burlesque, she says it is important to make time for each other. “The things that matter most to me, you just make time for,” she said.

The couple’s romantic trip to Paris follows their summer getaways to Italy and Mexico. No word if the couple will be spending Thanksgiving together, however, Seacrest did reveal via Twitter that he is looking forward to a yummy meal. “Craving Thanksgiving dinner! What time do u do it? We always do in the middle of afternoon so we can sleep on our stomachs by bedtime.”