Did Taylor Momsen’s diva antics get her suspended from Gossip Girl? 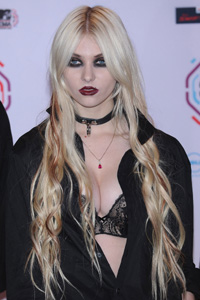 The net is abuzz with rumors circulating that Taylor Momsen has been “sidelined” from Gossip Girl, after only making appearances in three episodes this season.

The 17-year-old Momsen has been raising eyebrows off set, when the Pretty Reckless singer flashed a crowd and was talking smack about her parents — making Miley Cyrus seem pretty tame in comparison. Even Tim Gunn dissed Momsen’s unprofessional ways when he made a guest appearance on Gossip Girl.

“What a diva!” Gunn told E! News. “She was pathetic, she couldn’t remember her lines, and she didn’t even have that many. I thought to myself, ‘Why are we all being held hostage by this brat?'”

He went on to say she annoyed the entire cast and crew. “I’d say, ‘You know young lady, there are hundreds of thousands of girls who are just as attractive and even smarter than you. Why are you acting like this show is a huge burden on you?'”

Gossip Girl insiders tell E! Online that Momsen “isn’t going anywhere” and is contracted through season seven. They said that even though her bad behavior is “nothing new,” her absence from the show has been a creative decision. “Jenny isn’t in college like everyone else, so it’s hard to weave her into the central storylines,” the show’s source says. “We don’t want to just bring her in to hang out at the breakfast table with Lily and Rufus and say a line or two — we want a reason to have her there.”

What do you think? Should they keep Taylor Momsen on Gossip Girl?

read on for more taylor momsen