After filing for divorce from Jordan Bratman last month, Christina Aguilera was spotted holding hands with a new guy. 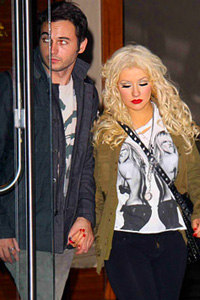 Christina Aguilera looks to have already moved on from her soon-to-be ex-husband Jordan Bratman. The 29-year-old Burlesque star was spotted in L.A. holding hands with Matt Rutler.

Who is Matt Rutler?

Christina met Rutler on the set of her new movie Burlesque. He is reportedly a set assistant and the couple apparently reconnected after Aguilera announced her separation from Bratman.

“They’ve been on a few dates,” a source told Us Magazine. “She’s not looking to jump into a relationship right now. She…is focusing on spending as much time as possible with Max.”

Max is her two-year-old son with Bratman.

Rutler and Christina were first spotted on November 5 having dinner at Soho House with Nicole Richie and Joel Madden. Rutler tried to hide from the cameras at the time, however, he doesn’t seem as shy this time.

A source says that Rutler has been “really good for her and is helping her through this difficult time.”

There has been much speculation as to what caused the split of Christina and Jordan — and now with Rutler entering her life so soon many are wondering if he is the reason they are divorcing. Whatever the reason, Christina is not talking, only saying she was ready for a change.

“Sometimes change is necessary. I’m entering a whole different chapter in my life now with the movie, and my son, and being a mother — the next evolution in my life,” she told talk show host Chelsea Handler.