Heidi Montag has reached a new low in her bid for publicity, blaming her dead doctor for her plastic surgery obsession. 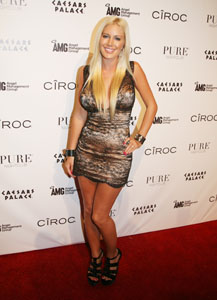 Heidi Montag told ABC News that the blame for the physical and emotional pain she has suffered from her extensive plastic surgeries — ten in a single day — falls squarely on the shoulders of Dr. Frank Ryan.

Sadly, Ryan is unable to defend himself because he’s dead. On August 15, 2010, Ryan’s Jeep toppled over the side of a cliff on the Pacific Coast Highway, killing him instantly.

Montag was eager to pass the blame onto a doctor she previously called “the most amazing person I have ever known.” She says she was totally unprepared for what was happening to her because Ryan downplayed the extent of the surgeries.

She even threw husband Spencer Pratt under the bus, although he probably deserves it. “He didn’t sign up to be the nurse to his 23-year-old wife at the time, day and night,” she said. “It was so traumatizing what my body looked like. I couldn’t look in the mirror. I was hysterically crying…and he’s like, ‘I didn’t marry this girl.'”

Check out Heidi’s interview on ABC:

read on for more heidi montag