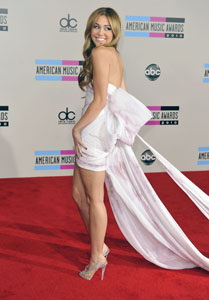 Disney star Miley Cyrus turns 18 today, but she celebrated in style a few days early at a pre-birthday bash after the American Music Awards last weekend.

Miley is soooo ready to jump into adulthood. She wore a much skimpier outfit to the party than she did during her awards performance — tight leather pants and a leather bra top with feathers hanging off the front — and was spotted being leaned over a bar counter having her neck sucked on by Canadian actor Avan Jogia.

She also brought the big girls out to play. Joining Miley at her bash was Demi Moore (who brought along her daughter Rumer Willis and hubby Ashton Kutcher), Mark Salling, Chord Overstreet and Miley’s mom Tish.

“She had such a good time,” a guest reported. “She was so happy and having so much fun just dancing nonstop, surrounded by all of her friends. It was the party she was hoping for.”

Notably absent? Miley’s dad, Billy Ray Cyrus, who is in the midst of a divorce from Tish.

But not to worry — Miley plans on celebrating for the rest of the month, so there’s plenty of opportunity for Billy Ray to join in.