After months of hype, Harry Potter and the Deathly Hallows Part 1 proved Potter and his pals are still magic with a $125 million opening weekend.

Harry Potter cast a spell on theater-goers, banking $24 million in its midnight screening debut alone. The final tally for the opening weekend was an impressive $125 million. Step beyond North American numbers and estimates have Harry Potter and the Deathly Hallows Part 1 banking $330 million, worldwide. 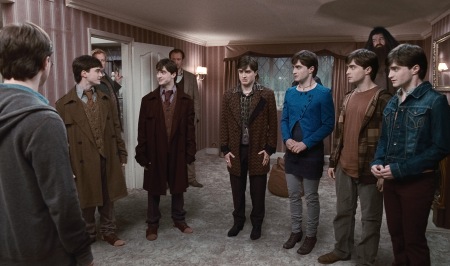 The North American numbers best any other installment of the Potter series. Harry Potter and the Goblet of Fire came closest, with $102.7 million. Harry Potter and the Deathly Hallows Part 1 ranked sixth in the list of all-time best weekend debuts, coming in just behind Iron Man 2‘s $128.1 million opening earlier this year.

Megamind was zapped out of the number one spot this weekend. While it didn’t even come close to Harry Potter‘s take, a $16 million weekend puts the DreamWorks Animation comedy at over $100 million in the US, so far.

Unstoppable fell to third with $13 million, having never quite gotten a start to begin with while Due Date banked $8.9 million for fourth place.

Morning Glory fell from the top five, landing in sixth with $5.2 million. Skyline came in seventh with $3.6 million.

Next weekend, a slew of movies hopes to steal Potter’s magic. Cher and Christina Aguilera dance onto the screen in Burlesque. Mandy Moore and Zachary Levi give voice to Rapunzel and the bandit she takes captive in Walt Disney’s Tangled. Dwayne “The Rock” Johnson and Billy Bob Thornton go for high action in Faster. Jake Gyllenhaal and Anne Hathaway get dramatic in Love and Other Drugs. The Nutcracker in 3D also hits theaters in select areas, with the wide release set for December 3.