Monday was day two of Oprah’s Ultimate Favorite Things 2010. What sort of amazing swag did Oprah give away this time?

Oprah gave away some amazing gifts on Friday’s episode, but that swag pales in comparison to the bounty presented by Oprah on Monday’s episode. The show — filmed immediately after the day one of Oprah’s Ultimate Favorite Things — started off with an audience filled with disappointed fans. 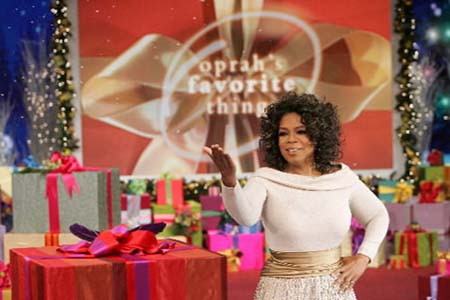 “Were you really ticked off you missed the first show? Did you see the people leaving with all their stuff?” Oprah asked. Many audience members shook their heads no, save for one vocal audience member.

“I was pissed!” yelled one lady from the sidelines. “They’re pissed too. They’re lying!”

Suddenly, a stray ornament rolled to Oprah’s feet and snow started falling. That’s when audience members figured out the secret.

“I got ya! I played y’all like a fiddle!” She screamed. The audience exploded into hysterics, as expected.

What did audience members score from Oprah?

2012 VW Beetle: Most amazing gift ever

The final gift on Oprah’s Ultimate Favorite Things isn’t even available yet. Oprah came out from commercial break in a VW Beetle. However, she told the audience that it wasn’t what it looked like.

It’s not what you think,” Winfrey said. “I wanted to give these to you, but VW said no. They said, ‘sorry Oprah, we cannot give everyone this Beetle, but maybe we can do one better.'”

Of course, the audience came unglued.

And with that, an era came to an end.

“It’s not about the stuff, although you’re gonna love driving that Beetle,” Oprah said. “It’s about hope, and knowing that something magical and joyful can happen to you when you least expect it.”