We’re in Chicago and hometown hero Vince Vaughn has invited us onto the set of his latest film, The Dilemma. Vaughn is joined by his co-stars Kevin James and Jennifer Connelly as well as his director, the always astounding Ron Howard.

Today, we premiere our set visit interview with Kevin James and Vince Vaughn, while our chats with Ron Howard and Jennifer Connelly debut November 23! 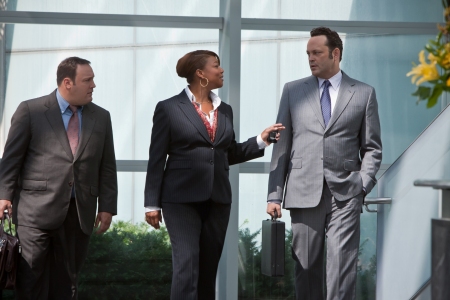 The Dilemma, out in theaters January 14, is a comedy that challenges how far one will go to help a friend, even if it means that comrade will be hurt. Vaughn and James portray best friends who have known each other since childhood and own an automotive business together. They are joined at the hip with their respective wives — played by Connelly and Winona Ryder.

Vaughn’s character learns that Ryder is cheating on James and his dilemma is whether or not to tell his friend that his wife is being unfaithful.

James and Vaughn sat down and gave us insight into The Dilemma, why Vaughn adores filming in Chicago and also how Ron Howard’s comic credibility brings a level of excellence to their new film. 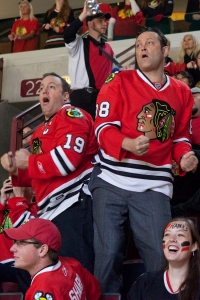 SheKnows: After just watching you two film a scene together, it’s hard to believe you don’t crack each other up throughout the shooting like you did during that scene. Does that happen often?

Vince Vaughn: It happens a lot with us, yeah. It does [laughs].

Kevin James: Once I feel it start to come, I feel a sweat start. It’s just very hard to pull out and the crew laughs for the first one or two and then they just sort of go, “Oh, boy.” I was able to pull it out [laughs]. I’m just concerned.

Vince Vaughn: He makes me laugh. Sometimes that happens when you’re doing this stuff. What I like about Kevin’s stuff — Kevin to me is such a great actor in that the reason why audiences always go so well with him [is] he’s very honest, he’s very genuine. You really connect to him, and to me, that’s very funny. Comedy is a sort of over-commitment to the absurd at times, and so the more that you’re committed to what your intention is in a real way, then to me that’s what makes me laugh. So a lot of times when Kevin is really dialed in and finds a way of really getting the point across, it really makes me laugh because this movie lends itself to coming from different perspectives.

SheKnows: Ron Howard is such a great director, and particularly an astute comic director. Does having him helming help keep you guys on task, comedy-wise?

Vince Vaughn: Ron is really great at that. Ron has a great understanding of comedy and he’s very funny. He does a great job of setting up an environment to go to. The other side of it is that you know the look of the film. So we’re getting a ton of stuff but we do it very quickly. So for me it’s helpful because it’s all momentum. The faster you can go, you can keep stuff going. That sort of helps it. It’s been amazing and just looks incredible. I think that adds to the comedy. It’s a real world with a real circumstance and it’s played very real. It’s almost like a look that we had in Swingers.

Kevin James: That’s the downfall of a lot of comedies to me. It is the look. A lot of times it feels like it’s so bright and so built and ready for comedy, that it actually hurts the comedy. What Vince was talking about, that it doesn’t feel as real and you don’t feel as connected to it…

Kevin James: Yes, exactly, especially when it’s something that you have to buy into. This is a serious subject but yet it makes it easier because you’re in it and you feel the real ebb and flow of the scene. You feel where the comedy would come naturally and it comes out looking so good when we see the dailies and stuff. So I’m excited, I really am.

SheKnows: There’s different chemistry with different comic pairings, but it appears from the scenes we’ve seen shot for The Dilemma, you guys hit it off immediately. Is that safe to say?

Kevin James: Well, I mean he’s the best at what he does. You know that. You see him with [Jon] Favreau. You see him with everybody and he does it. So it was kind of like double-Dutch for me to jump in, it was seamless though, it honestly was. 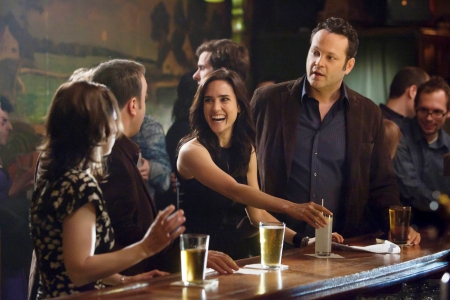 Vince Vaughn: But really, I think with improv, and I say it all the time because it’s become such a catch thing that you talk about improv, but if the scene is well written you don’t need to improv. But, if something strikes you in the moment, and most importantly you know where the scene is supposed to go, it’s no different than method acting. It’s just listening, so that you can respond appropriately if something happens that you don’t expect. But it’s important to know where the scene needs to end. If the scene needs to end with me and him no longer friends or upset at each other, it’s not about coming up with clever references to say that are just interesting for that sake.

Kevin James: That’s what happened [laughs]. We were getting flat on that scene and Vince came over and said, “Don’t worry about the line.” What happens is you start concentrating on the lines and hitting your points, and I end up just staring at him and I’m not in the scene. You can feel yourself, you’re out of it. But he just said, “Remember your intent and remember what we’re doing here.” Once we went back to that, we had a better take. It felt more alive. Then you feel that you’re in it again. So that’s the only thing that you have to be aware, I guess just getting too comfortable which will numb you to a scene sometimes.

Vince Vaughn: Sometimes you do a free one because it kind of makes it fresh and then you go back to what’s written and it’s just a way to sort of break it up.

Up next…Vaughn and James talk about getting into that BFF mode on and off screen and what it is about Chicago that makes Vaughn call it home.