Kim Zolciak is pregnant! Will she get her own Bravo spin-off show? We sure hope so! Read on for our ideas for a pregnant Kim Zolciack reality show.

Bravo’s Andy Cohen has a lot to be thankful for this Thanksgiving. Real Housewives of Atlanta star Kim Zolciack is pregnant, the reality star reported today. The outrageous blond bombshell and her Atlanta Falcon boyfriend Kroy Biermann are set to become parents — Zolciack’s fourth child. 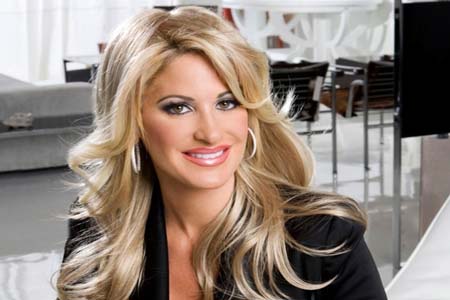 Real Housewives of New York star Bethenny Frankel managed to spin off onto her own Bravo show, Bethenny Getting Married, after she announced her engagement and pregnancy. We’re betting money the same will go for Zolciak.

Why not? Cohen and Bravo love outrageous personalities, and Zolciak is about as outrageous as it gets. We’d love to see a show that focuses specifically on her pregnancy — we’ll even give Bravo the title. How does Kim Zolciak: Induce Me sound? We think it’ll be ratings gold!

Marriage in the future?

Zolciack says she has no current plans to marry Biermann — especially while pregnant.

“I definitely don’t want to get married while I’m pregnant. But I can see myself marrying Kroy in the future,” she said.

Of course she won’t get married during her pregnancy — she needs to ensure the second season of her spin-off show. Yes, yes — we know nothing is official yet, but we’re sure it will be.

In the mean time, we’ll continue watching the Real Housewives of Atlanta and reveling in all of her tacky, gaudy glory. Congratulations Kim!

Read on for Real Housewives of Atlanta