T.I. opened up about his drug problem and how he got sober in the December issue of Vibe magazine. 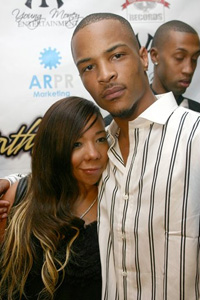 T.I. told Vibe magazine that his drug problem started after his doctor prescribed Oxycontin and hydrocodone after having dental surgery.

“After the pain went away, I kept taking it. I had like five, six prescriptions. So, I had, like 80 pills. Everybody else might drink or smoke a blunt; I took a pain pill,” he said.

The 30-year-old rapper said that his September arrest, after police found ecstasy pills on him, helped him get clean and sober. Even though this case was dropped, the judge did order him to 11 months in jail after breaking his probation by trying to buy illegal guns.

T.I. said that before going back to jail, he attended therapy sessions, including one-on-one and group sessions, to help combat his addictions. “If you rationalize putting yourself in harm’s way, risking your well-being, your health, your freedom, your family’s well-being and livelihood in order to be high, that’s the rationale of an addict,” he told Vibe.

Denies Tiny has a problem

His wife, Tameka “Tiny” Cottle, 36, was also arrested and faces a misdemeanor drug charge, however, T.I. denies his wife has a drug problem.

“I don’t know. She went with me to some meetings and counseling. She ain’t got no problems,” he said. “Her thing is she smokes. Smoking weed is different than taking pain pills. You can smoke weed today and not smoke another blunt for another three months.”

T.I. and Tiny have two children together, and T.I. has three additional children from previous relationships.

read on for More T.I.