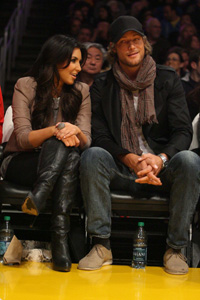 Kim Kardashian was spotted at the Lakers game in LA last night with Halle Berry’s ex-boyfriend and model Gabriel Aubry. The two sat close by each other and talked throughout the game.

Aubry and Halle announced they were splitting up in April. The two have a daughter together, two-year-old Nahla. Berry has since been linked with her Dark Tide co-star, Olivier Martinez.

“Kim and Gabriel met a few times while they were both in New York, and there was definitely chemistry,” a source told Life & Style. “But when Kim returned to Los Angeles last Thursday, they really took it to the next level. They went out to dinner, caught the Lakers game and spent time at Kim’s house.”

Kim tweets at the game

Kim tweeted throughout the game but kept mum about her date, Gabriel.

Later, she posted a twit pic of her and George Lopez, saying, “Look who I saw at the Game! Love u.”

Tell us: What do you think of Kim Kardashian and Gabriel Aubry dating?