Miley Cyrus may act like she is 21, but she actually turns 18 tomorrow and, with the help rumored boyfriend Avan Jogia, has already started celebrating.

Miley Cyrus quickly changed out of her long black dress she wore at the American Music Awards and slipped into a halter top and tight leather pants to celebrate her 18th birthday at L.A.’s Trousdale with Nickelodon star Avan Jogia. The cameras reportedly caught them in a full on birthday make-out session! 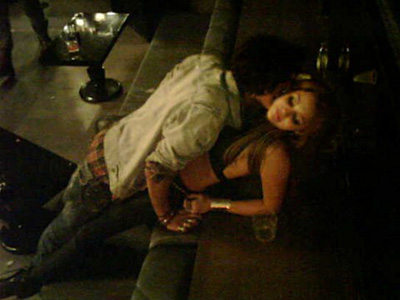 Even though Miley doesn’t officially turn 18 until tomorrow, she and her mom Tish Cyrus, along with Demi Moore and Rumor Willis, celebrated with a white tiered birthday cake. Her rumored boyfriend, Jogia, was reportedly at her party – and they were getting frisky by the looks of it!

“I’m going out dancing later — we rented out a space so all my friends can come,” Miley told Access Hollywood. “Me and my mom actually have choreography for the night later — everyone loves when we dance in unison.”

Please tell me someone got this on video. 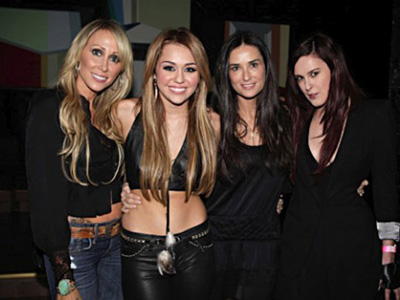 Miley said that she and her mom get lots of practice playing Xbox 360’s dance video game called Kinect. “There’s one [move] where you do like, the fist pump. You ‘Jersey Shore’ it for a second!” Miley said. “We got a bunch of moves going on. Everyone goes wild when me and my mom have choreography, so it’s going to be good.